Today’s designers are trying to find new ways to create a name for themselves while holding up their sustainable values. For many, the answer is Trashion, fashion created from trash, literally.

Although the actual term was coined in 2004, there is a long history before that. Worldwide for hundreds of years, indigenous people have been repurposing the old into the new. It’s standard practice for indigenous communities to live a zero-waste lifestyle. Maximizing the utility and minimizing consumption meant mindfully using every resource available to them. Zero-waste indigenous communities apply this philosophy to more than just fashion.

The punk movement of the 70’s and 80’s used trashion as an anti-consumerism protest. Punks have been creating trash into wearables as a symbol of non-conformity. Punks would use scissors and thread to fashion a garbage bag into a dress that they would sport. Today in mainstream fashion we still see punk elements like safety-pinned t-shirts and razor blades on jewelry.

The word trashion was created in 2004 in New Zealand. Soon after, the word took off in the New York party scene in 2005 when underground club Urban Gypsy Circus had a trashion themed night. Trashion night encouraged party-goers to have some real creativity with their outfits. For most of the attendees, it was the first time they had created their own outfits from scratch. The night’s success inspired designers to create their own trashion and for other clubs to continue hosting Trashion Night.

Designers are influenced by indigenous zero-waste practices and punk DIY fashion to challenge themselves to create wearable fashion out of discarded waste. Many find it a creative way to combat the 92 million tons of fashion waste each year. Daniel Silverstein,  a popular zero waste designer, says trashion is like “…Rumpelstiltskin spinning straw into gold”. Daniel is known for using post-consumer fabric scraps to create streetwear for his brand, Zero-Waste Daniel.

Designers are addressing the waste problem in two different ways, visible and invisible upcycling. Infamous pieces like the Girlfriend Collective recycled water bottle activewear have no evidence of their past life. Each legging is made from about 25 recycled water bottles that have been cleaned, melted down into thread and then woven into the material. Methods like this take many extra steps involving factories that produce extra industrial toxins in the process, though this is a creative way to utilize single-use plastics.

Other designers are using visible upcycling methods where we can see the remnants that go into their clothes. Using fabric scraps, designers combine the waste of other garments to create their own. A sewing technique called patchwork involves the stitching together of many smaller fabric pieces to create a large more usable material. The result is one-of-a-kind garments that take thoughtful decisions each step of the way. That is the definition of ‘made with love’. This past year, denim patchwork inspired by the iconic Zana Di patchwork jeans came back strong. Cheap remakes were created by brands like urban outfitters and Shein though the attempt from UK brand, Jaded London,  was the most sought after.

25 year old designer Maria Bernad founded the upcycling studio Les Fleurs over four years ago. Their website provides a creative space for designers to showcase their work, and for consumers to explore other brands. Their core values are to “respect mother earth, create an honest brand, and encourage creative growth”. The shop houses indie designs made from recycled and upcycled materials. Tablecloth corsets, patchwork tanks and shoes made from old men’s ties are a few of the unique pieces they carry.

Colina Strada is New York based label created by designer Hillary Taymour. The brand defines itself as fully sustainable and radically transparent creating a refreshing image in a pool of secretive fast fashion brands. Their website is the epitome of inclusivity, featuring all genders, sizes and ages in their product images. Colourful designs explore youthful themes while addressing serious issues in the industry. Her designs even reuse past collections remnants to bring the brand full circle and eliminate waste.

Susan Fang’s label was created in 2017 upon graduation her from London fashion school, Central Saint Martins. Her interest in light refraction and fashion come together in her beaded creations. Her iconic pieces featuring bubble beading have brought lots of attention to her brand. Using marbles as beading to create an elegant yet interesting look is the reason for her popularity. She has applied her ideas to flip flops, capes and handbags.

Susan Fang’s label was created in 2017 upon graduation her from London fashion school, Central Saint Martins. Her interest in light refraction and fashion come together in her beaded creations. Her iconic pieces featuring bubble beading have brought lots of attention to her brand. Using marbles as beading to create an elegant yet interesting look is the reason for her popularity. She has applied her ideas to flip flops, capes and handbags.

Montreal-based shop, 3347, combines a slouchy boho style with the mixing of textile prints to create a distinct aesthetic. The oversized silhouettes are challenged with the girly ruffles that are present in so many of their creations. Babydoll styles and vintage style beading are brand staples. Their process requires deconstruction to begin the reconstruction of what will become their stock. The brand wants to help customers question their intentions and consumption when shopping to promote mindful purchases. 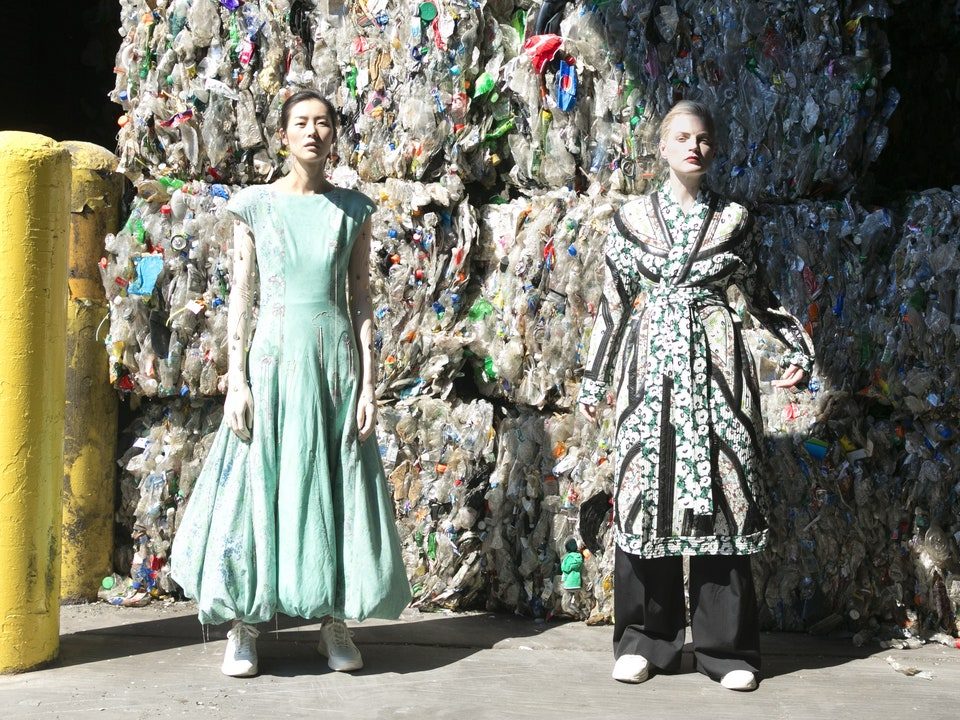 Image via vogue.com Written by: Hana El-Sharabasy Today’s designers are trying to find new ways to create a name for themselves while holding up their sustainable […]
Do you like it?0
Read more